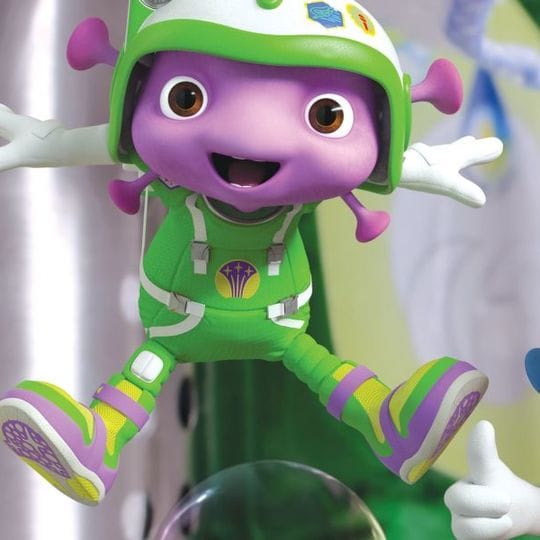 Jellyfish’s Denis-Jose Francois tells us how Zodiak Kids show “Floogals” is pushing the boundaries of CG in TV for tots.

CG on TV has improved massively recently. Megabudget shows such as Game of Thrones, and the proliferation of ultra high definition 4K flatscreens has led to small screen VFX which look just as good as those used in theaters. And high-quality imagery has even trickled down into the world of kids’ TV.

It’s particularly true of Zodiak Kids’ show “Floogals”, which tells the story of three aliens who’ve crash-landed on earth in photorealistic, globally illuminated glory. Jellyfish Pictures, which was responsible for the show’s CGI, saw it as a golden opportunity to push kids TV into more realistic territory.

“If you look at the early CG TV shows, there would be no reflections, no shadows,” says Denis-Jose Francois, CG Supervisor at Jellyfish Pictures. “Now, it's not a far stretch to do full global illumination and subdivision surfaces. We're not quite at the area of cloth and hair simulation yet, but we’re not far away.”   To create Floogals, Zodiak Kids shot the live action and Jellyfish stitched backplates integrating the CGI on top. These backplates were shot in Jellyfish’s home city of London, but as the show is aimed at a US audience. The Zodiak Kids production team had to be careful to choose locations which could pass for suburban America, working with Jellyfish to carefully paint out light switches and electrical outlets.

Something of a phenomenon

In each of the show’s episodes, the all-CG Floogals investigate a different earthly phenomenon, such as ice or turtles. This interaction required a blend of on-set puppeteered props, and wholly CG objects.

“In some shots, we had to replace real world objects in the backplate with CG versions, and these shots had to be indistinguishable from the ones with real objects in them,” explains Denis-Jose. “It was quite challenging to do that for 52 episodes, but it's what sells the show–when you see the Floogals move objects.”

Jellyfish and Denis-Jose have experience working in kids’ TV before thanks to BBC show Planet Dinosaur. But this was the first time they’d used V-Ray as a renderer—and it turned out to be up to the job.

I was a little skeptical, but I have to say, I like it quite a lot. It worked very, very well. It's very reliable, you get very consistent results. We had the usual issues that people have starting off with any brute force or full on ray tracer - stuff like getting rid of noise and fireflies. But we got past that relatively quickly, and V-Ray turned out to be a very good work horse. I would definitely go with V-Ray in the future.