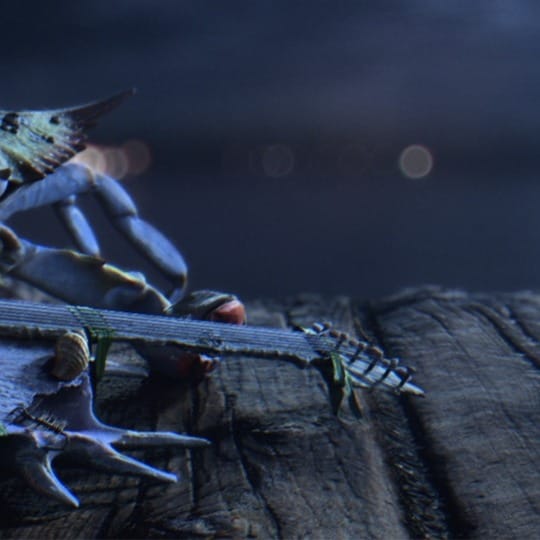 Inspired by childhood adventures crabbing in the Chesapeake Bay, veteran compositor and director Ari Rubenstein set out to create animated short film The Blues Crab in an entirely new way — one that sidesteps conventional workflows and puts creative control in the compositor's hands.

With the help of industry friends and support from YellowDog, Chaos Group, and Foundry, Ari was able to bring The Blues Crab to life. It's an original and soulful tale set in the bay where he grew up, soundtracked with blues and soul music. "It’s a very cinematic environment with a lot of character and texture,” Ari explains. “I’ve always wanted to communicate it to others.”

A typical computer animated film may take dozens or even hundreds of CG artists, modelers, animators, lighters, FX, matte painters and more, who all feed their work to a compositor. Then, the compositor assembles the pieces, fits everything together and applies the finishing touches. This production pipeline produces highly specialized CG artists, but the required coordination between them all can stifle creativity.

“I was positive there were alternatives to the big studio methods, and that I could create high-quality animation at a fraction of the cost,” says Ari. “A key artist could wear many hats, and generate shots which fall outside the standard pipeline, but producers tend to view this as a potential weak link, and tend to avoid it. However, this is where innovations happen.”

Under Ari’s new model, the compositor is given more creative freedom, making them akin to a director. “A single individual can perform a soup to nuts solution, without waiting for an entire pipeline of specialists,” he explains. “It frees them up creatively, and gives them many more options in look development.”

V-Ray for Nuke provides master generalists a legion of opportunities by placing all assets into the hands of the compositor, who has a unique perspective on what is superfluous in production.

After 25 years in VFX and animation, Ari knows how the well-oiled pipeline works. He’s worked for companies such as Blue Sky Studios, Xaos, and Tippett Studio on commercials, game cinematics, TV series, and movies. His impressive resume includes credits on Hellboy, The Matrix: Revolutions, Constantine, and the Rio and Ice Age franchises, and he’s even set up his own studio - Curv - which is responsible for The Blues Crab.

Key to Ari’s prototype pipeline is V-Ray for Nuke, a ray-traced production renderer that transforms Nuke’s capabilities. The software has already been used to create scenes in Deadpool 2, The Revenant, and Spectre, but it’s never been used to render a whole short film. Seeing the potential in Ari’s project, Chaos Group’s Alex Karakashev jumped at the chance to help out through the company’s Partners in Art program.

“V-Ray for Nuke provides master generalists a legion of opportunities by placing all assets into the hands of the compositor, who has a unique perspective on what is superfluous in production,” says Ari. “No one else in the VFX and animation production pipeline knows what was left on the cutting room floor, and what was used in the final deliverable.”

To help create the world, the story, and the environment of The Blues Crab, Ari asked for help from his numerous industry contacts. To write the story, he turned to fellow compositor and long-time co-worker Zoe Peck, who also helped with the cinematography and design. The sound design and music were handled by Ben Cozens, who Ari met at the BFX Festival in Bournemouth, England.

For everything else, Ari placed an ad on LinkedIn, asking for artists to contribute to this non-profit film. Over 60 people responded from around the world, and Ari was able to connect with them using film production management software and storage, and video conferencing.

“Artists contributed from almost every continent,” says Ari. “Our lead rigger Shekar is from Malaysia, our lead texture artist Ravi is from India, and The Blues Crab itself was created by Tomas L’Estrange, a talented character designer from Brazil. We had animators from Russia, France, Brazil, India, Canada, Spain, Turkey, Bangladesh, and of course the US.”

For both Ari and the artists, it was a win-win situation. Ari would get the assets he needed, while the artists would gain experience working with an industry pro, and exposure when the short is shown at film festivals and visual effects events.

How to make a believable crab

Animating the gnarled Blues Crab for over 30 shots proved to be a research and design challenge Ari could get his claws into. For instance, the crab’s beard was composed of seaweed, barnacles, and whiskers, which had to bounce around and collide with his shell realistically. The crab was animated from a reference file in Maya, with Maya’s nCloth rig for the beard’s natural underwater movement.

“Before making this film I hadn’t used nCloth, I hadn’t used Maya references, and I hadn’t messed with wrap deformers,” says Ari. “So I asked our character technical director Troy McCormick about references, as well as technical director Haven Cousins about nCloth and preparing nCloth into pre-animated shots, and character supervisor Keith Stichweh about simulating with low-resolution geometry, and then applying it to high-resolution geometry with wrap deformers. All in all, about five different craftsmen contributed their expertise to help me pull it off.”

The Blues Crab meets YellowDog: rendering in a custom-built cloud

One of the opening shots of The Blues Crab is also its most data-heavy. It plunges from the water’s surface to the ocean floor, with a Houdini water sim, reflections, refractions, splash and bubble elements, god rays, a kelp forest, two hero crabs with displacement, and an extreme foreground sand bed. And, like all the underwater shots in the movie, there are the caustics, flotsam and silt kicked up by movement.

Rendering such complicated shots, combined with Ari’s new pipeline, required more computational power than the director had access to — but the answer lay in the cloud. Enter YellowDog, a cloud compute company which saw The Blues Crab as a perfect opportunity to demonstrate how its service could wrangle masses of data into beautiful animation. With YellowDog’s help, Ari was able to submit a massive 100,000 frames to a public render farm.

It was also a great chance for YellowDog to add to its product range. When Ari first approached the company for render support, an off the shelf YellowDog plugin for Nuke didn’t exist in the same way that it did for Maya, 3ds Max, or Cinema 4D. The YellowDog team seized the opportunity and developed a custom V-Ray for Nuke plugin and cloud application to support Ari and The Blues Crab. When development was complete, Ari could export his scenes to YellowDog without re-structuring his V-Ray for Nuke workflow.

“I prefer to get my hands into the art and make pretty pictures than do code and configuration, or systems and integration type of work,” says Ari. “But with YellowDog I was able to cloud render directly from Nuke using the V-Ray for Nuke renderer.”

As well as speeding up his workflow, Ari and his authorized contributors could preview renders from anywhere in the world. With no cloud configuration, additional V-Ray licensing, or pipeline integration to worry about, Ari’s finished renders were automatically and securely downloaded back to his chosen location without any wrangling or troubleshooting.

“The software architecture was easily installed and managed by Yellow Dog’s crew, and they even intuited what I’d need before I asked for anything,” Ari explains. “Throughout the production, I have had no technical snags at all. That’s a lot of throughput without issues!”

Where and when to see The Blues Crab

The Blues Crab will premier at the BFX Festival in Bournemouth, England on October 2, 2018. It’ll be the culmination of two years of hard work from Ari and his crew, and a potential game-changer for the visual effects and animation industries. But, more importantly for Ari, it’s been a chance to unite friends old and new on a project close to his heart.

“I love how all these characters from different backgrounds come together towards a common goal they all take pride in,” he says. “Vital people vitalize others. My hope is that this film will serve as a way to add substance beyond commerce to my life and others. If you’re thinking of making a film, my advice is, jump in and do it. The journey will benefit you in many ways which are unparalleled in your day job, and the true rewards won’t be revealed until you come out the other side.”